Our lab investigates cognitive and neural mechanisms of memory for personally-experienced past events, or episodic memory (EM), using a combination of behavioral and functional MRI (fMRI) methods. Traditional fMRI studies focused on identifying the brain regions associated with different cognitive processes but more recent studies seek to understand the nature of the information stored in various brain regions, or representations, and how multiple brain regions interact with each other, or networks. At present, we are pursuing three main lines of research: EM representations, EM networks, and the effects of healthy and pathological aging on EM representations and networks. Recently, we started a new line of research on creativity and memory.

The EM representations stored during encoding are reactivated during retrieval. We investigate this reactivation by measuring similarity between activation patterns during encoding and during retrieval, or encoding-retrieval similarity (ERS). For example, in one study we found that the reactivation of the representation for visual scenes in an occipitotemporal region (ERS) was associated with successful EM performance (e.g., Wing et al., 2015, see Fig. A). 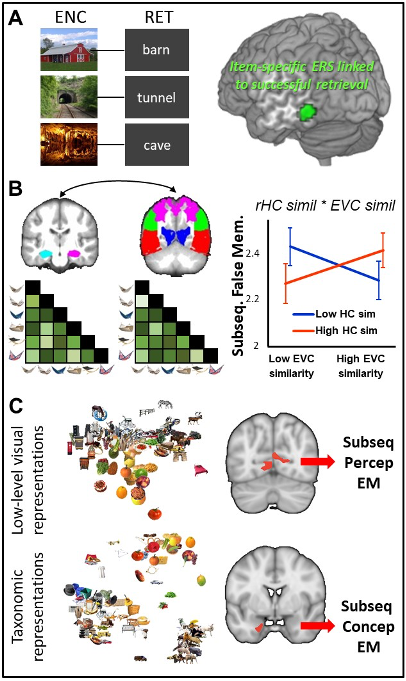 We also measure the similarity between the activation patterns elicited by similar stimuli (e.g, different hammock pictures). For example, we found that false memories are reduced when high similarity in the cortex (e.g, early visual cortex) is counteracted by low similarity (pattern separation) in the hippocampus (Wing et al., 2020, Fig. B). Finally, we use model-based representational similarity analyses (RSA) to investigate different types of representations (e.g, visual vs. semantic). We assume that the encoding of single event leads to the creation of different types of representations (e.g, visual vs. semantic) in different brain regions, which predict subsequent memory differently depending on the type of EM task employed. For instance, in one study we found that the low-level visual representations stored in early visual cortex predicted memory in perceptual EM task while (semantic) taxonomic representations stored in perirhinal cortex predicted subsequent memory in a conceptual EM task (Davis et al, in press. see Fig. C). 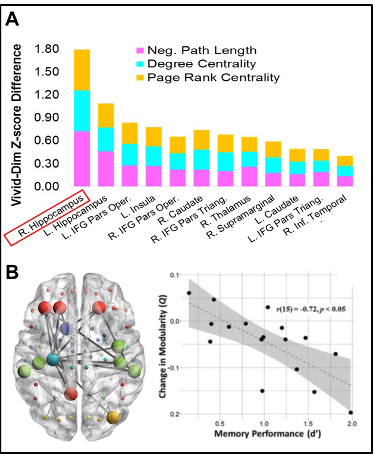 EM representations are processed by a distributed network of brain regions, which we investigate using functional connectivity (co-variance in neural activity) methods and graph theory analyses. Our graph theory studies indicate that successful EM depends on network integration, particularly involving medial temporal lobe regions, such as the hippocampus. For example, in one study we found that as a function of retrieval success, the hippocampus was the brain region showing the greatest increase in integration (Geib et al., 2017, Cereb Ctx, Fig. A). In another study, we found that the hippocampus interacted most closely with a “retrieval assembly” and that memory performance is associated increased integration (reduced modularity) of the whole brain network (Geib et al., 2017, HBM, Fig. B).

3. Effects of healthy and pathological aging on EM representations and networks

As we age, the anatomy and function of our brain deteriorates leading to cognitive decline. However, the aging brain does not respond passively to these changes but it actively compensates for them by reorganizing its functions. 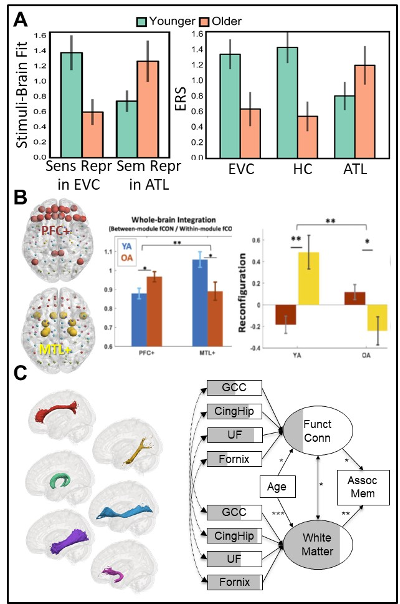 For example, the cognitive abilities that decline substantially during aging, such as vision and EM, are partly compensated by greater reliance on cognitive abilities that are relatively spared by aging, such as general knowledge of the world and language (semantic memory, SM). For example, in one study we found that although sensory representations in early visual cortex show a reduction neural distinctiveness with aging known as dedifferentiation, semantic representations in the anterior temporal lobes show the reverse effect, which we termed hyperdifferentiation. A similar effect was observed in memory representations assessed with ERS, which showed an age-related deficit in the hippocampus but an age-related enhancement in the anterior temporal lobes (Deng et al., under review, Fig. A).  Age-related compensation can be also observed in the contribution of different modules of the EM network. For instance, in one study we found whereas an MTL module showed less whole-brain integration and less reconfiguration as a function of memory in older than younger adults, the prefrontal module showed the opposite effect (Deng et al., in press, Fig. B). Finally, it is important to relate changes in functional connectivity with aging to underlying changes in structural connectivity due to the decline of white-matter integrity (which can be measured with diffusion tensor imaging—DTI). For example, in one study we directly linked the effects of aging on structural and functional at the level of individual fiber tracts (DTI tractography) and using structural equation modeling we examined these interactive effects on associative EM (Davis et al., 2018, Fig. C).